“When Australian Catholic University offered me a place in the Diploma of Nursing, it was the best day of my life. I was so happy,” said Brittnie.

Her career is a result of the now 23-year-old’s strength and determination. But it hasn’t been easy.

Life before a Kids Under Cover studio was tough. Four adults living in a two bedroom house with one bathroom! Brittnie was at risk of leaving with nowhere to go.

Brittnie takes us back to life before the studio.

“My aunty, my nan, my brother and I were living on top of each other in the two-bedroom house with one bathroom.

Three of us shared one bedroom and relationships were really tense.”

Brittnie was the primary caregiver to her brother, Jesse, who needed to be looked after 24 hours a day.

“Jesse has cerebral palsy and developmental delay. I’d get up early, shower him, feed him, put him on the bus, then head to school. We all chipped in, but it was still hard.”

Before moving in with their grandmother and aunt, both Brittnie and Jesse lived in an unstable and unhealthy home environment. “Life was tough and with Jesse to support and look after there was not much time for me”  They were in a better situation at their aunt’s house, but finances were strained and there was a severe lack of space.

Things turned around immediately after the Kids Under Cover studio was installed in the backyard of her grandmother’s house.

The studio gave Brittnie space for herself, to be herself.

“I could be who I wanted to be, in my own space, and study in my own room, without the noise and other distractions,” said Brittnie.

Supported by Kids Under Cover scholarships Brittnie had the opportunity to follow her dreams and reach her career goals.

“The scholarships were a life saver, they helped pay for essential school stuff – like textbooks, pens, calculator, my uniform. They wouldn’t have gotten paid for otherwise. Finding the money was next to impossible.”

A little extra support for educational expenses went a long way to building a brighter future for Brittnie who was actively involved in school and within the community.

She became school captain, was a star on the debate team, and for almost a decade, she has mentored a group of young people who have a sibling with a disability.

Brittnie continues to work hard to build a brighter future for herself while still caring for her brother.

“I’m working as a Division 2 nurse in an aged-care facility close to home. I’m loving it. It’s so rewarding. Putting smiles on people’s faces makes me happy – knowing I’m making a difference in someone else’s life makes me happy.”

What Brittnie has achieved in her personal life and within the community is quite simply, inspirational. 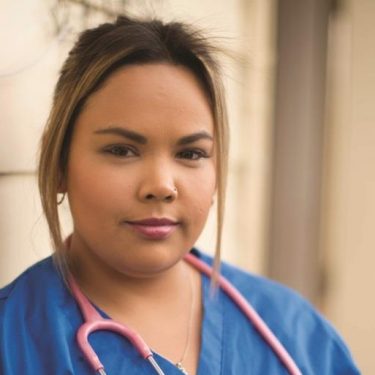 studios on the ground