“The day we found out we were getting a studio, we were so happy. Adam loves his studio. He has his friends over now – something we couldn’t do before.” Silvana

Potent combination of disability and overcrowding

Ricky, 13, has an incurable condition that causes tumours to grow through his brain and along his optical nerve. It has rendered him legally blind. Treatment has been ongoing, and the side effects relentless. The brothers shared a small bedroom, which meant both boys had many sleepless nights.

Like any 16 year old, Adam was facing teenage challenges, but for him they were compounded by a mild intellectual disability.

Adam and Ricky’s mother, Silvana, explained: “Ricky has quite a few tumours and cysts in the brain, and that causes behaviour issues. He’s very demanding and high needs. So his issues and Adam’s behaviour issues just clashed a lot. Adam’s coping mechanism was anger, and it got to the stage where Ricky couldn’t stay in the bedroom with Adam. It was too much for him.”

Silvana said sometimes the fighting would get so bad that Adam would just take off.

“He would go down the street or go to the park and just cool off. I’d let him cool down, and then after a while if he didn’t come back, we’d go out and start looking for him. I was very worried that he wouldn’t come back.”

Silvana added that the studio had relieved so much pressure and now the family dynamic is much happier.

“The day we found out we were getting a studio, we were so happy. Adam loves his studio. He has his friends over now – something we couldn’t do before because we had no space. He keeps it clean it tidy, and he’s really learning to be independent,” said Silvana.

She said Adam is a changed young man. He now speaks with excitement about his future and his dreams to play in a rockabilly band. The brothers no longer fight and there is peace, a sense of relief and a new-found calmness. And Ricky has the space to better manage his health.

“It kept us together. I don’t like to think where we’d be without it,” said Silvana. 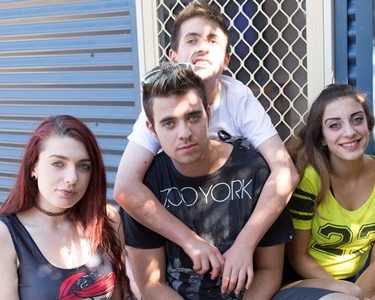 studios on the ground

Read more stories from the families Kids Under Cover has been able to help, thanks to the generosity of our partners and supporters.