In a year when so much schooling was done at home during lockdowns, Junior can’t imagine how he would have got through his VCE had he not had the quiet of his studio. 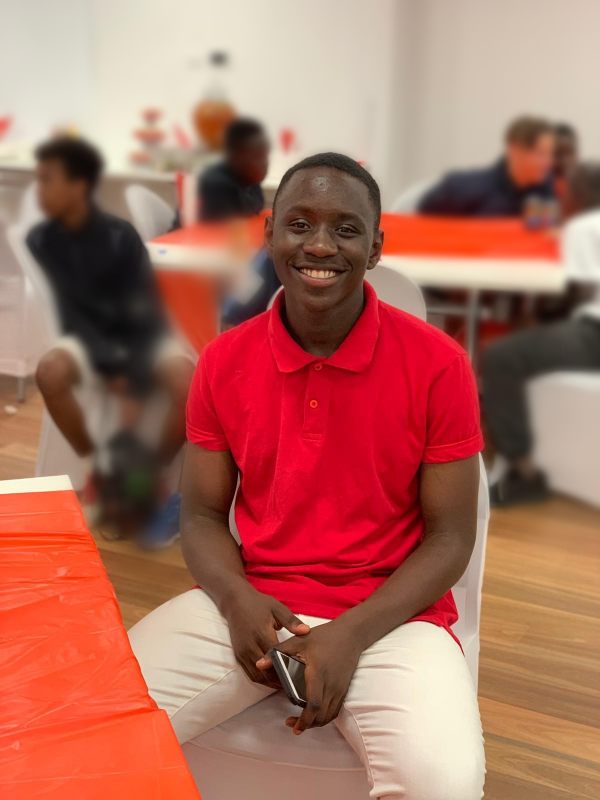 “If I had to do VCE inside the house I probably would have had to repeat year 12,” he says. “My house is so noisy. And my siblings were all on their computers at school as well. I’d be trying to understand the principles of accounting while my sister is screaming for food, one brother’s annoying another brother…”

Junior’s family found refuge in Australia after having fled war in Africa when he was one year old. He arrived in Australia as a toddler with his parents and four older brothers. His three younger sisters were born here. Growing up, Junior remembers how things in the house could sometimes get frightening.

“It came to a point where things started getting violent,” Junior recalls. “That was my early childhood. I’d go to school, be happy and then I wouldn’t want to go home to chaos – arguing, fighting, sometimes getting physical. I didn’t know much because I was only young. But I knew it felt wrong.”

When Kids Under Cover provided a studio for Junior and his brothers, it provided space in the household to help things settle down.

“Even though the studio is for me, the family benefits,” Junior says. “The sister next to me, she has her own space, she has her own room where she gets to grow up like a girl. When your organisation helps one person it has like a domino effect and reaches all the way through the whole family.”

Junior is also a grateful recipient of a Kids Under Cover education scholarship – helping provide the things he needs for a successful start studying banking and finance at university. He says it gives a whole new meaning to what scholarship actually means.

“My understanding of a scholarship was that you had to be academically gifted. So when I received the scholarship based on what I’ve been through, it gave me hope, not only for myself but for others. This is a scholarship for having experienced a lot of hardship. That’s when I realised what the word scholarship really meant. It’s an opportunity to make the most of something.”

Junior says Kids Under Cover’s Scholarship and Studio Program has sparked the will to focus on what he knows is important to him and his family.

“The scholarship reminds me that I need to focus on school and Kids Under Cover have given me the opportunity to do that. I also need to focus on keeping my family healthy, and by providing the studio, it’s kept my family healthy in terms of drama. The organisation is just the extended family that a lot of people need but don’t know they need. I mean it’s nice to find help but it’s even nicer when help finds you.”