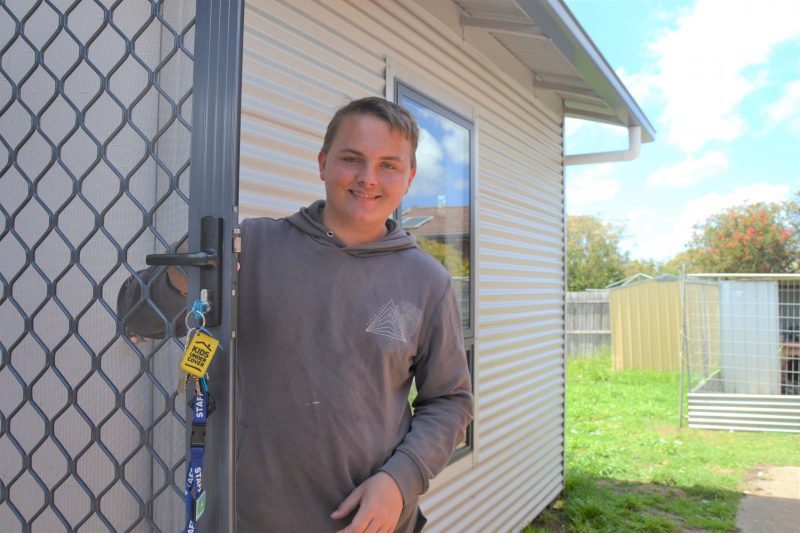 When Lincoln showed us a TV news report he produced for a student YouTube channel we thought it might have been a clip from the Channel 9 news. It was a story about the impact of COVID and such was its polish we kept having to ask if it was really him!

At 15, Lincoln is the oldest of five children in his household. The family face multiple challenges including five family members contending with ADHD – all within a small 4-bedroom house in Greater Geelong.

Lincoln’s mum, Kelly, was close to breaking point with so much going on under one roof. “There were really high levels of anxiety, anger and aggression in the home. There was a lot of yelling,” she says.

The arrival of a Kids Under Cover studio in late 2020 in the backyard of their place gave Lincoln and his sister much needed relief from disruptions inside the family home. It also prevented the very real prospect of Lincoln leaving home without being properly prepared.

“I’ve put my stuff in there and made it look like the room I want,” Lincoln explains. “Before the studio, we were all cramped inside so if we got angry or something we weren’t able to vent. So now that we’ve got the unit, we’re able to call a friend and talk to them without having mum or the other siblings listening in.”

The extra space has also had a clearly positive impact on Lincoln and his siblings’ connection with school – particularly over a long period of schooling from home. Lincoln has also started working for a local TV station.

“Before the studio was built, life was hard,” Kelly recalls. “The older kids couldn’t do homework properly because the younger kids were always on top of them. Now Lincoln has this opportunity with the station and we’re just so, so proud.

“The studio has made everything much calmer. The kids are more settled. Everyone is more settled. They can go out to their own space to gather their thoughts. They are happier and it has made a big difference to their wellbeing. It’s saved this whole family.”