Jacinta & Holly’s Story – Where the Heart is

“It felt very weird for me as Holly’s mum when she was living in homelessness accommodation. I felt as though I’d failed as a parent because, despite three out of my four children being comfortable at home, I had a child who was not able to live with us. And I couldn’t find her a more suitable home.”

Jacinta is a mother of four children aged between 8 and 24 years. They all live at home with Jacinta and her husband in a 1950’s cream brick bunker – 3 bedrooms, 1 bathroom and a study. 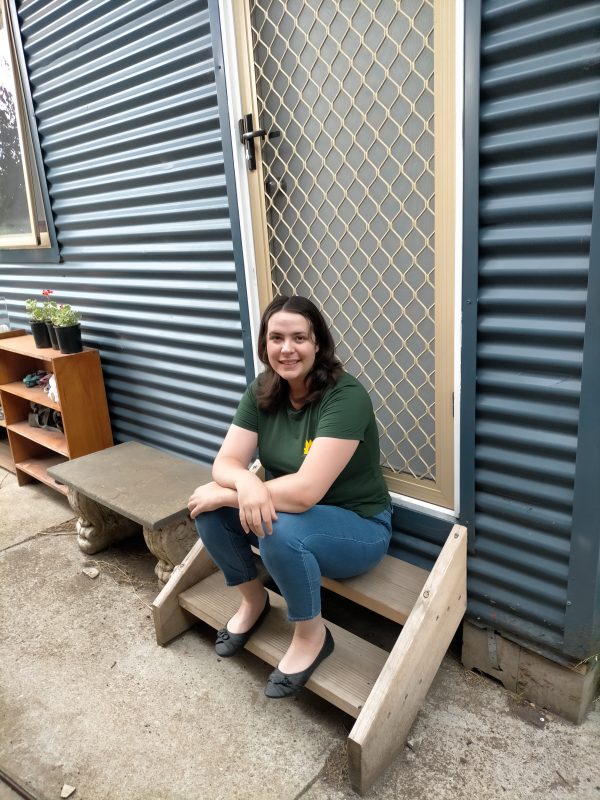 “There’s simply not enough room for a family of six in a 3-bedroom house among the chaos and clutter,” Jacinta explains. “Especially since five of us are autistic.”

Holly is the second eldest child. She battles with anxiety and trouble with sleep. Gradually through high school she’d spend less and less time at home. Firstly at her boyfriend’s house supporting him through illness until that relationship ended, then couch surfing and eventually in emergency accommodation.

“It was really distressing when Holly left her boyfriend’s home and couldn’t re-integrate here,” Jacinta says. “She tried sleeping on the couch, but our loungeroom is too public, noisy, busy and bright. She tried sleeping in her old bed, but the same problems occurred – the lack of privacy, the crowding, the distraction was overwhelming and living here was not a viable option for her.”

In April last year, Kids Under Cover provided a studio in the backyard of the house. It changed everything.

“When Holly was sharing her small room in the house, she would come home and fight the urge to leave again right away. Now she can walk into her own space without having any stress over who is there, or what might be happening. It’s very liberating, and with the security of having her family mere metres away.”

Only recently, Holly couldn’t imagine what her future might hold. Now she’s considering a range of study and employment options while she builds a more stable network with her family, friends and community.

“The inability for a young person to be comfortable at home can become so stressful that it spirals into greater and greater anxiety,” Jacinta says. “Imagine coming home to find that you can’t relax or even sit still and be comfortable no matter what you do.”

“Being able to have an independent space adjacent to the family home lets them relax and re-set their emotional state. Now we know we’re all safe at our home on our street, among our neighbours. It’s as safe and secure as having Holly in the home, but with enough space and separation to alleviate the stress and to give her the autonomy she needs. For a young person like Holly, the studio makes a key difference that opens up options for her future. It’s a life-saver.”