The life-changing impact Kids Under Cover has for young people and families is clearly demonstrated through our annual program evaluations. The evaluation looks at both short-term outcomes and longer-term impacts achieved through our Studio and Scholarship Program, thanks to your support.

This year 151 carers were interviewed as part of the evaluation, representing 25% of families with a Kids Under Cover studio.

Carers report their lives, and those of the young people, are much improved since the Kids Under Cover studio arrived. The results show particular improvement in overcrowding, family harmony and general mood of the young person who lives in the studio.

This year’s evaluation segmented evaluation respondents by the length of time the young person had been in a studio, ranging from less than a year to 5+ years. There was little statistical difference in the outcomes for young people who had been living in the studio for a longer period of time. This demonstrates the initial positive impacts experienced when receiving a studio are maintained over time.

Carers were also asked about the impact the of studio during COVD-19 and stay at home restrictions. 88% of carers reported that the studio made dealing with the pandemic easier, compared to how it would have been without the studio.

We thank the dedicated team at DBM Consultants for their generous and ongoing support of this evaluation work.

Hear from the Carers:

“It’s made a huge difference in our household. It’s almost stopped all the negativity, the fighting and the yelling… everyone seems to be happier because they have their own space.”

“I think without the studio, she wouldn’t have made the leaps forward in terms of her own mental  health, judgment and emotional responses.”

“They are looking forward and actually talking about their career path, not hanging about the streets, they are not doing anything illegal.”

“It was life changing for us, really brought us all together and got her off the streets.” 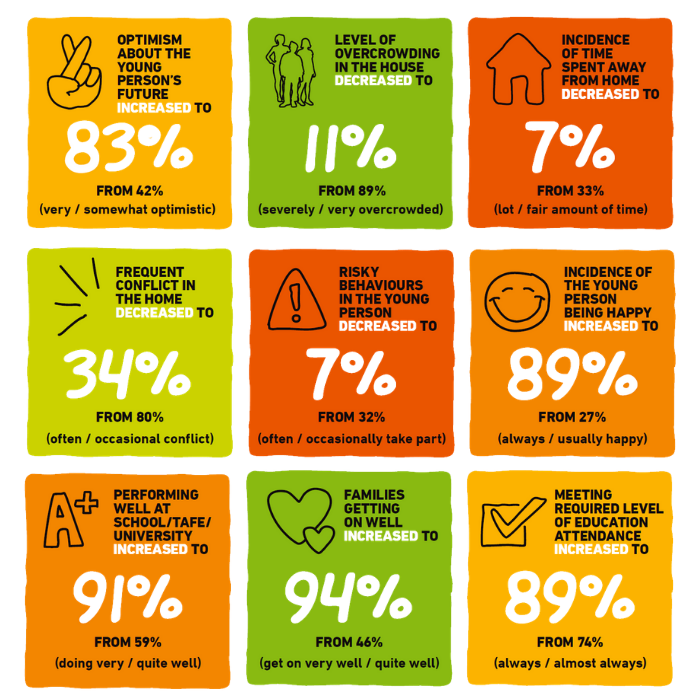